Your grandfather has recently passed away and you end up inheriting his café and house. You intend to keep the café running as a tribute to your grandfather, but you have no idea as to where to start. That's when a school gets in touch with you and asks if you are willing to host some trainees who have some experience in running a café. You take the offer without much hesitation. To your surprise, however, the trainees are not four humans but four humanoid cats! Humanoid cat workers aren’t that rare these days, but this is still your first interaction with one. And thus, your story begins as you work alongside four catboys! 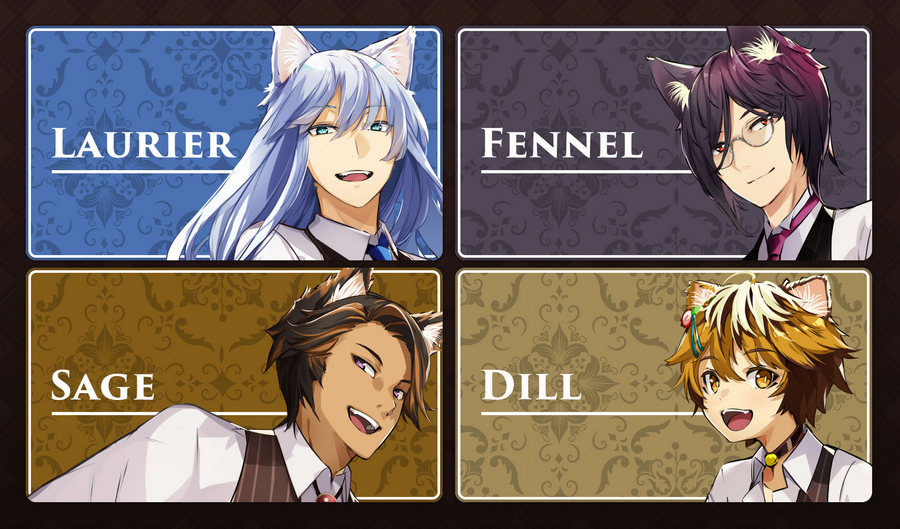 "The sleepy prince who does things in his own way"

Laurier appears to be a lazy catboy that takes naps whenever he can. When it comes to work, however, he always does his job perfectly. Due to his friendliness and handsome appearance, he is very popular with female customers. He is actually a talented catboy who can achieve anything if he sets his heart to it.

"The supportive catboy who aims for perfection"

For the sake of you and the café, Fennel strives to provide you with useful advice. He is a hard-working perfectionist who sets high standards for himself. Since he sleeps less in exchange for more time to study, nobody has actually ever seen him sleeping.

"The strong, yet kind-hearted older brother"

Sage is a catboy that's rough with words, but he always takes care of everyone like an older brother. He is a big-hearted catboy who does not care too much about details. He never hesitates to offer help whenever he can.

Dill is a very approachable catboy who can make friends with practically anyone. He is a big fan of fashion, which explains why his biggest worry is buying too many clothes. Sometimes he picks clothes for you or helps you with makeup.