The year is 2014. Shinjuku, Tokyo. Japan, where "onmyoji" is a recognized profession. Here lies the city of Tokyo, unscathed by major air raids for the entirety of World War II.

The era is a mixture of both the old days and the new. In the midst of what appears to be peaceful, everyday life, there are many incidents of people being harmed by demons. Having been previously banned at the close of the war, the practice of onmyoji is now used solely as a countermeasure for those incidents.

The world is on the brink of chaos. Tokyo is home to hollow, wandering souls. It is now known that most of the demons who cause harm were formerly humans. Why do humans transform into demons? What is the true nature of the darkness lurking at the root of all this? A mystery lies in this place of intersecting emotions. 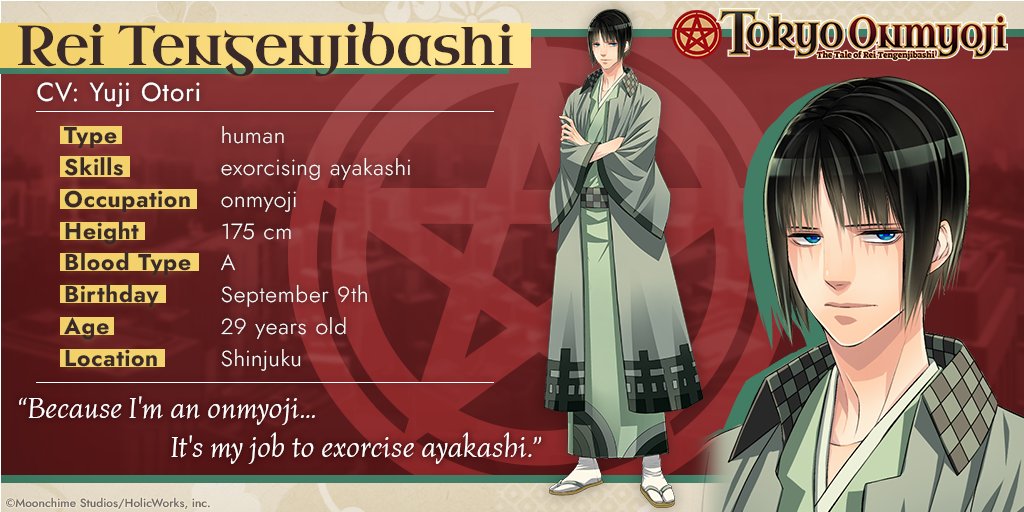 "Because I'm an onmyoji... It's my job to exorcise ayakashi"

A young man who comes from strict family background, making a living as an onmyoji in the back alleys of Tokyo. He has the power to seal ayakashi and even destroy them if absolutely necessary. He takes things at his own pace while avoiding anything he deems too flashy, completely unashamed of his openness to sexual relationships. Times when he is deep in contemplation and scheming, his expression rarely reveals what he is truly thinking. Having an aversion to doing tedious work, he leaves the house chores to Basara and prefers to pass the time painting on sliding screens.

"You really like rice, don't you? That's great and all, but you should also be keeping up on fish and meat..."

A young man who works as an onmyoji and makes regular appearances on television and in magazines due to his popularity.

He attended the same junior high and high school as Tengenjibashi, and while he is not as skilled in the art of sealing and destroying ayakashi as his old friend, he does possess the ability to heal.

He has a tendency to mother others, often fussing over Tengenjibashi―sometimes even scolding him, but he does so for his sake. He makes sure to keep up appearances while on the job as a manager but is an honest and devoted man with a cheerful disposition at heart.

"It's been a long time since I've been asked that. I murder any ayakashi in my way, so it's no surprise."

A mysterious man who is skilled onmyoji but appears to only take commissions through criminal channels. He acts as a lone wolf, coming and going as he pleases, and annihilates any ayakashi he lays his eyes on without hesitation.

He puts on airs of superiority and confidence but has the skills to back it up and only knows how to use brute force. There are times he will do anything―even resorting to dirty tactics―to get what he wants, but other times he neglects his job.

His aggressive, merciless tactics have not only earned scorn from the people around him but brought him to the attention of the ayakashi 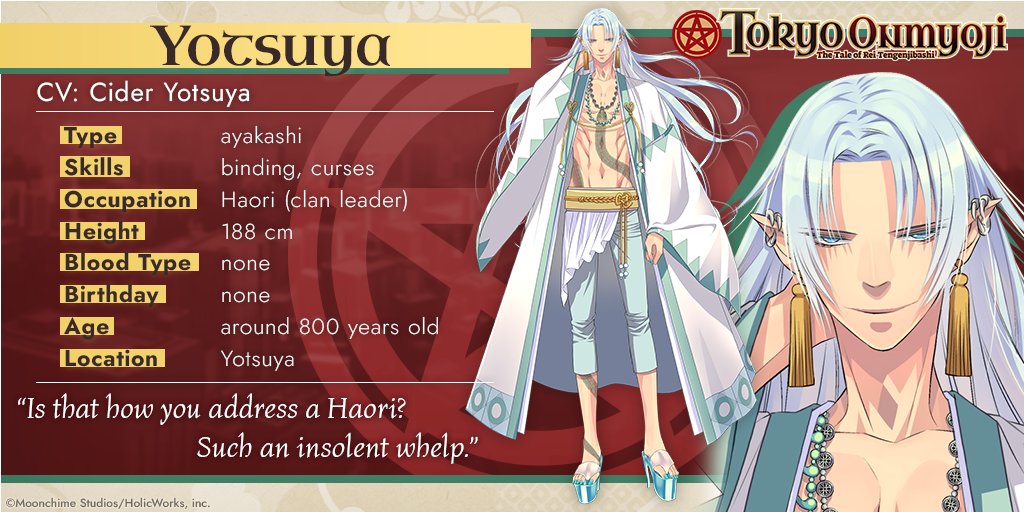 "Is that bow you address a Haori? Such an insolent whelp."

He is the one and only ayakashi with the highest rank of Haori in Yotsuya and takes ayakashi who have caused trouble in the past under his wing. He is benevolent and cherishes his friendships, but is also intimidating when angered.

He is capable of binding, commanding, and killing with curses. Deeply invested in Tengenjibashi’s view of ayakashi, he keeps a close watch on him and sometimes ends up playfully teasing him.

He is willing to lend a hand when asked but demands to be paid back in return. At times, he gives Tengenjibashi various tasks to do, amusing himself with the way he reacts. 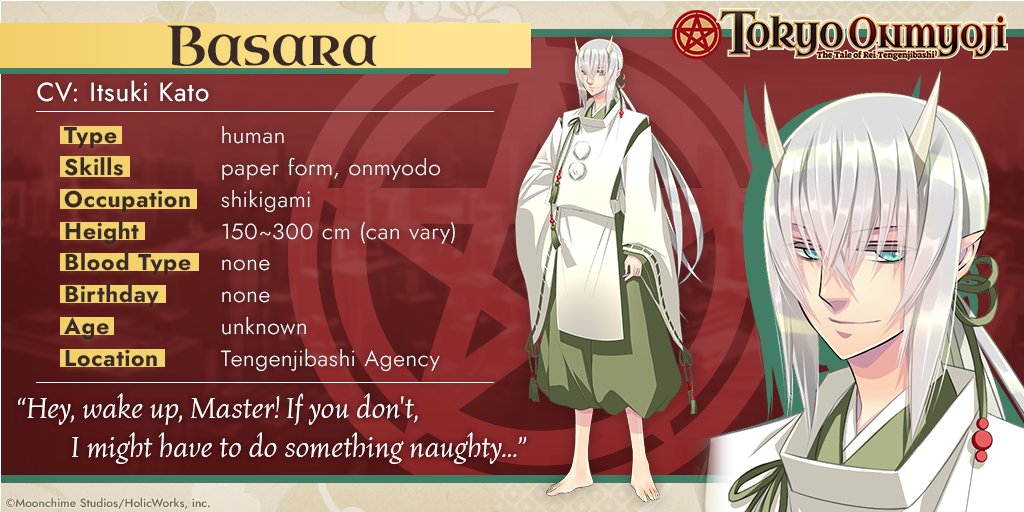 "Hey, wake up, MAster! If you don't I might have to do something naughty...."

He is Tengenjibashi's shikigami who has the power to change between a human form and a paper form and is skilled in onmyoji techniques.

Much like his master, he’s insatiably lusty and solicits him every day, only succeeding around half the time. He has a bubbly personality and openly conveys his wide range of emotions.

He constantly dotes on his master—who is also his creator—and has a deep affection for him, both emotionally and physically. He courts and tops him whenever he gets the chance, but when he happens to upset him…